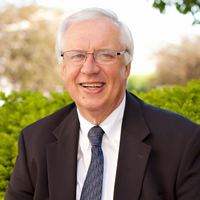 On why he protects his clients:

Jim’s father died at age 52. As a teacher and guidance counselor, he had life insurance for two and a half times his salary, so Jim’s mother received only about $20,000. Even though his father joked about being  worth more dead than alive, the money didn’t last long. Jim and his sister took care of their mother, who eventually remarried. Jim believes she made the choice because she felt financially pressured. “I don’t want my wife to have that situation,” he said. “I always ask clients, ‘If you die tonight, does anyone suffer financially tomorrow?’ ... We can't replace our parents, husbands, wives or loved ones, but we can alleviate the financial loss suffered relative to their passing."

Problems are a part of life. Charlie used to say, “You’ve got a problem? Of course; you do, you’re not dead!” Sometimes, God doesn’t give us problems to tear us down, but to lift us up. We don’t want them – nobody does – but we grow because of them. So, when Charlie would pray for your problems, he’d pray that they would get worse.

Things you might be surprised to know about Jim:

Jim served in the U.S. Navy during the Vietnam War. He traveled many places around the world, including the Mediterranean and Cuba, but not Vietnam. He was actually able to go up to the top of the Leaning Tower of Pisa before it was closed to the public.

As a soldier, Jim shot an M1 at 500 yards with open sights on target in shooting competitions. He didn’t win, but he qualified to go to Annapolis and get out of Cuba for a while. It was close enough to home that he could visit on the weekends.

Get Financial News & Updates Delivered to Your Inbox